THE IAEG SUPPORTS the “Declaration against war” 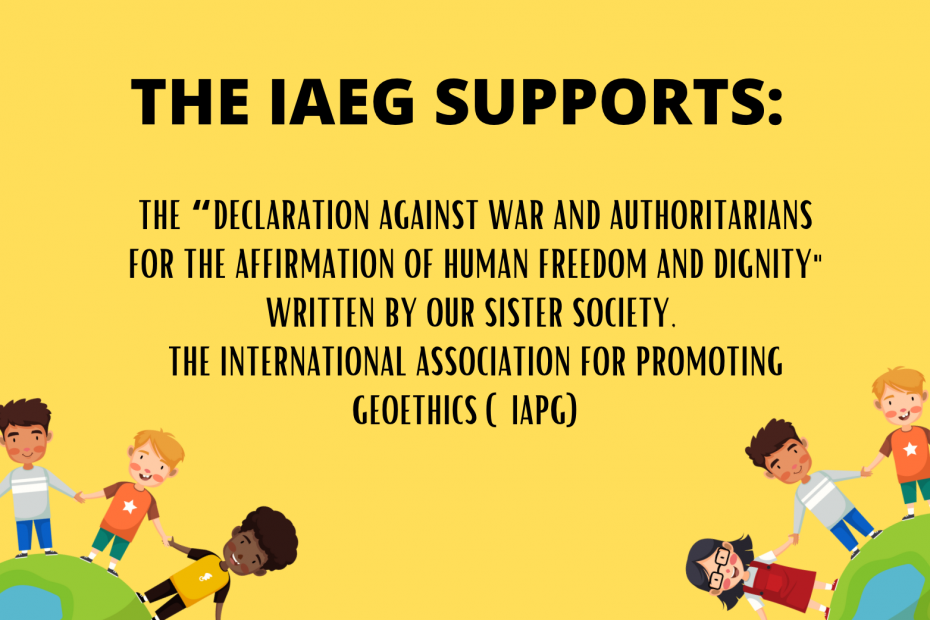 Written by our sister society, the International Association for Promoting Geoethics (IAPG), it starts out from the war between Russia and Ukraine but is against all wars.

The International Association for Promoting Geoethics (IAPG) expresses its solidarity with all the people who are experiencing their present situation with difficulty and fear due to armed conflicts and who are suffering the repression of fundamental freedoms by authoritarian regimes.
We are close to colleagues from our section in Ukraine who are suffering from the invasion of their nation and are trying to resist the barbarism of war. We are also close to those Russian scientists and intellectuals who are courageously manifesting their rejection of war and demanding the right to peace.
Likewise, we cannot forget our colleagues in Myanmar who are experiencing government repression and our colleagues in Afghanistan, including those of the local IAPG section, for the harsh living conditions in which freedom, health and safety are not guaranteed. We are also close to our colleagues in Yemen, in the Democratic Republic of Congo and in all those countries in which governments or groups of powers don’t respect the fundamental Human Rights of United Nations.
The IAPG rejects war and oppression for the resolution of conflicts and supports all those who fight for the affirmation of human dignity and for freedom from the oppression of dictatorships and fundamentalisms.
We strongly affirm that all human beings must be guaranteed dignity, freedom and knowledge. Everyone has the right to be able to live in freedom, health and safety and at the same time has the duty to responsibly guarantee freedom, health and safety to other human beings.
We are convinced that power must be implemented as a responsible exercise of community service, for the construction of more just, equitable, inclusive, supportive, peaceful, sustainable and ecologically oriented societies.
The revival of nationalistic models is anachronistic and represents a real threat to humanity, which instead, precisely in the recognition of its unity, albeit in the diversity of the cultures that constitute it, is beginning to cultivate that feeling of planetary citizenship that can accompany it towards a future of solidarity.
We invite the international scientific community, geosciences organizations and beyond, to sign this declaration.

The IAPG Declaration and signatories can be read here: https://www.geoethics.org/declaration-against-war.

Support this declaration by sending an email to: iapgeoethics@gmail.com